In memory: posthumous testimonies of life and works

On 17 June 1915, a few days after the death of Antonio De Toni, on 8 June, his father Ettore sent a letter to the Prefect of the Botanical Garden of Padua, Pier Andrea Saccardo, in which he recalled his fallen son:

You, who knew him as a pupil, were able to appreciate his beautiful qualities. He wanted to offer himself, even if not called, for his Country and he sacrificed his life, leaving us in tears. His career, his beloved studies, everything is broken by the enemy bullets, but our heart is broken over all.
Forgive, dear professor, a father and always believe me yours 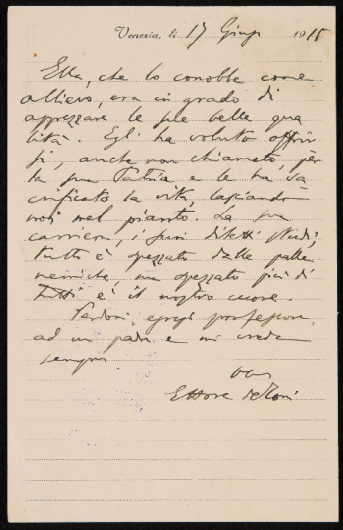 A few days later, during the meeting of the Geological Committee in Rome on June 26, 1915, Mario Cermenati gave a speech in memory of his colleague and soldier.

In October of the same year, his uncle Giambattista keep alive the memory of his nephew, who had followed in his university career, psublishing a short article In memory of Antonio de Toni in the magazine he edited, Nuova Notarisia. Here the uncle retraces the scientific path of his nephew.

After the war, the memory has not yet been affected either by time or by war: in 1925 the magazine L'alpino (The alpine) recalls Antonio De Toni as A Hero of Monte Piana. 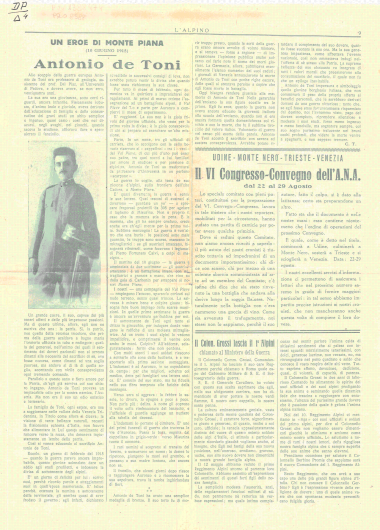 Article of "L'alpino" in memory of Antonio De Toni. Author's signature: C. T. The date in the title refers to the death of Antonio De Toni, which actually took place on June 8, 1915. Publication date inferred from the reference to the 6. congress of the A.N.A. of August 1925.

The University of Padua places a plaque at the Faculty of Engineering, dedicated to its fallen scholars and students in the Great War: the list in alphabetical order is preceded by the name of Antonio De Toni, who was the first to die.

In 1991 Stefano Manfrin and Paolo Mietto review some fossils, already studied by Antonio De Toni, and relocate them in a new genre, which they dedicate to him with the name of Detoniceras, on the centenary of his birth.

On 7 June 2015, on the centenary of his death, a plaque was placed between the Pyramid of Carducci and the summit cross of Monte Piana, right at the point of the clash in which the Sub-lieutenant De Toni was mortally wounded. On the plaque it is recalled that De Toni had been awarded the bronze medal for military valor.